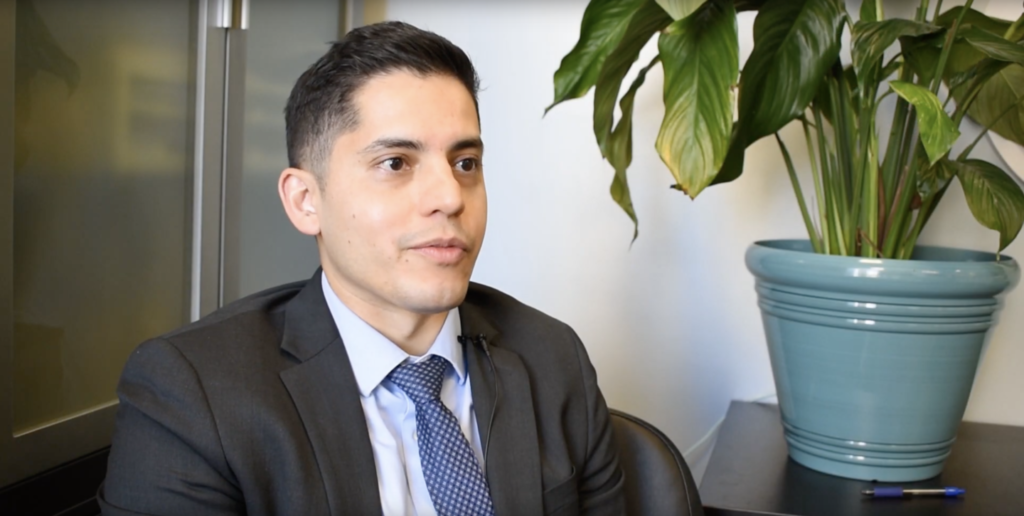 I was only five months into being a lawyer, and I was there to represent a young woman named Naomi who had immigrated to this country to marry a man who was significantly older than she.

About three months after having exchanged their vows, Naomi found herself living in a nightmare. He controlled all of the finances. He kept her passport and her immigration documents locked in a confidential location where she had no access to them. She spoke very little English and was unable to work, unable to drive, or even communicate with her family back home because she had no access to a computer or a phone.

All other attorneys in that courtroom happened to be representing respondents – including Naomi’s abuser.

Eventually, the abuse had turned physical. He would grab her, push her, punch her, force her to have sex, and even strangled her on several occasions while she was pregnant.

She tried calling the police on one occasion, but when they arrived, she had a difficult time communicating with them, and he was able to talk to the officers and “explain” what had happened. After the police left, he threatened to kill her and take her baby if she ever called the police again.

I sat next to Naomi, watching other more experienced attorneys move around the courtroom with the ease and confidence I was convinced I would never find in myself. All other attorneys in that courtroom happened to be representing respondents – including Naomi’s abuser.

If I am being honest, though, as a new lawyer with only five months of experience, I was quite nervous, too.

As we waited for our hearing, we witnessed other family violence cases go before the court. Naomi grew increasingly nervous as each case was being adjudicated. So, I, in turn, did my best to reassure her that it would be okay.

On top of that, Naomi trembled at the sight of her abuser sitting in the same courtroom as her. She kept saying to me, “You don’t know how he is. He’s really smart. He always convinces everyone that I am crazy. The judge is going to believe him over me. I just know it.”

Naomi’s experience is common among victims of intimate partner abuse. There are a myriad of reasons why victims are unable to break away from an abusive relationship, and each case may have its own unique set of circumstances. Now that I am in family violence court almost every day of the week, it’s clear to me that it takes each victim of intimate partner abuse an incredible amount of planning, courage, and strength to make it to the courthouse to file a protective order against their abuser.

Sitting in the courtroom with Naomi, self-doubt crept in with each minute that passed. Am I missing something?  Am I in over my head? Why did I want to be a lawyer again?

Sitting in the courtroom with Naomi, self-doubt crept in with each minute that passed. Am I missing something?  Am I in over my head? Why did I want to be a lawyer again?

But eventually, the court granted Naomi a protective order. I remember breathing a tremendous sigh of relief, because it meant that Naomi would be safer and on her path to finally break away from her abuser.

I cannot imagine the planning and courage it must have taken for her to finally leave and seek out a protective order, fully knowing the risks to her life if she failed.

When I sat next to Naomi in court years ago, I am not so sure that I could fully grasp how much it meant for her to see a lawyer, a judge, and law enforcement officers treat her with genuine dignity and respect. She closely watched other people stand before the judge to confront their abusers before being called to the stand herself. She watched how the judge treated everybody in court, she observed how the judicial staff worked diligently to get the orders ready as quickly as possible, and she watched how law enforcement officers treated people as they asked assistance from them.

All of these pieces were critical for her to feel empowered to be in that courtroom.

My anxiety that day was real, but it was nothing compared what Naomi must have gone through. I cannot imagine the planning and courage it must have taken for her to finally leave and seek out a protective order, fully knowing the risks to her life if she failed.

It’s true: the vicarious trauma and stress of working in a family violence courtroom can leave us feeling burned out or deplete us of compassion at times. No one is perfect. We may consequently become more cynical with each case in which we witness the legal process being abused. No one likes to be deceived.

Despite these challenges, we devote ourselves to serving survivors.

But because we are serious about upholding the integrity of the legal process, we have to offer kindness and tolerance – even when our patience is tested. We can’t fall into cynicism and frustration. We have to remember that each survivor’s story is complex and extends far beyond what we see in family court.

We must remember that each time a person walks into family violence court, they may have taken a day off from work to be there, despite not having paid time off. They may have used the last of their paycheck to cover for childcare or transportation. They may be exposing themselves to further victimization by their abuser in court.  They may appear severely anxious, hysterical, confused, irritable, or even hostile – all of which can be symptoms of trauma.

Despite these challenges, we devote ourselves to serving survivors. We choose to stand with survivors by honoring their strength and courage.

Want to read other Letters From Leadership? They are an easy way to find out what drives us here at AVLF. You can find them all here.