Haus Gables has a lot to say about the history of Old Fourth Ward. 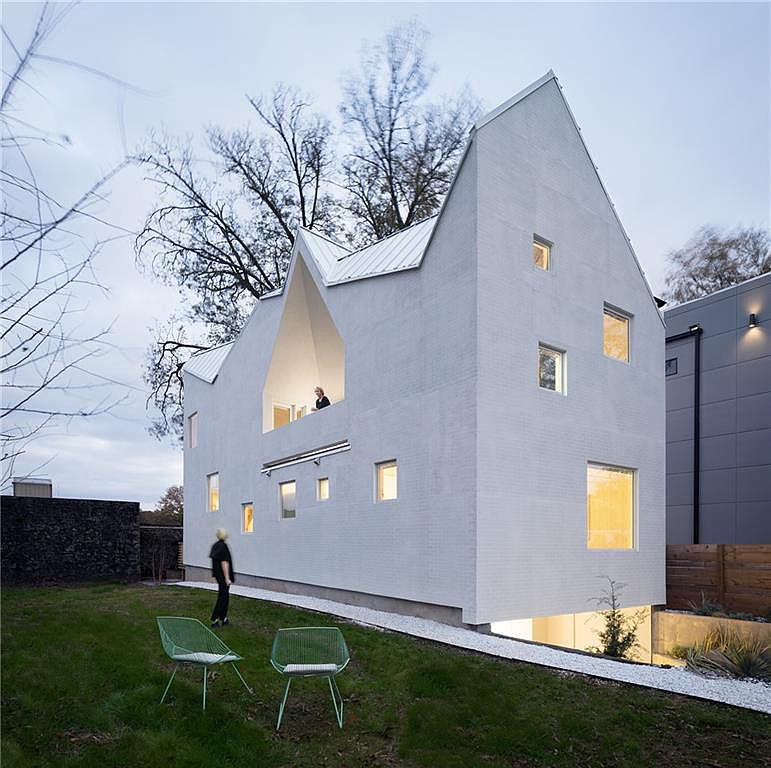 At what point does a house become more a work of art than a place to live? It’s safe to say that Haus Gables crosses that line – with its stark white façade and towering presence, it will stop you in your tracks when you come across it in Atlanta’s Old Fourth Ward neighborhood.

If our front doors are the welcoming smiles on the faces of our homes, Haus Gables is expressionless, blank-faced.

It certainly stopped me, as I was driving down Sampson Street – I pumped the brakes so hard I’m lucky no cars were behind me. Haus Gables stands out from its neighbors like a postmodern castle.

Perhaps the most notable feature of Haus Gables is its lack of a front door. If our front doors are the welcoming smiles on the faces of our homes, Haus Gables is expressionless, blank-faced. Originally on sale for $1.25 million (it’s now a $278/night AirBnB rental), there is no better metaphor for Haus Gables’ inaccessibility. And there is no neighborhood that better encapsulates Atlanta’s dramatic gentrification than Old Fourth Ward.

The demographics of the neighborhood became steadily whiter, as working-class Black families that had lived there for years were priced out.

In 2013, as the Beltline began to wind its way through Atlanta neighborhoods, the average sale price for an Old Fourth Ward home was $280,000. Five years later, according to the AJC, that price had skyrocketed to $660,000.

Over the same time period, the demographics of the neighborhood became steadily whiter, as working-class Black families that had lived there for years were priced out. Now, the smallest two-bedroom apartment at the Ponce City Market Flats rents for $3,000 per month.

Atlanta’s Equitable Housing Assessment found in 2018 that the rental housing gap for households earning less than $30,000 per year is projected to grow by 1,300 units annually. This means that the poorest of the poor – including full-time minimum wage workers, whose gross earnings are $15,080 a year – are facing an increasingly dwindling supply of homes they can afford.

The people living in homeless encampments and tents under highway overpasses have already learned that Atlanta’s houses have no front doors – at least, not for them.

Many will never find affordable housing, and are forced into slum conditions, extended-stay motels, or street homelessness. The people living in homeless encampments and tents under highway overpasses have already learned that Atlanta’s houses have no front doors – at least, not for them.

Efforts to mitigate the worst harms of gentrification are underway. For example, proponents of affordable housing in Atlanta are seeking the reduction of single-family zoning, paving the way for accessory dwelling units on formerly single-family lots – a change that could dramatically increase the pool of affordable housing while simultaneously reducing neighborhood racial segregation.

The people living in homeless encampments and tents under highway overpasses have already learned that Atlanta’s houses have no front doors – at least, not for them.

But this idea and other creative solutions face pushback from realtors, landlord associations, and others. Whether Atlanta will continue to force out its poorest residents, or create new front doors to abundant and affordable housing, remains to be seen.

Help us secure safe and stable homes for our clients by donating today.

Cole serves as the co-director of AVLF’s Safe and Stable Homes Project. He supervises the Saturday Lawyer Program and the Eviction Defense Program.

Cole grew up in the upper-middle-class area of Bergen County, New Jersey, but his family struggled financially.  In 1993, when Cole was sixteen years old, the bank foreclosed on the house he grew up in, and Cole and his family had to move to another town.  Cole attended Williams College, where he worked in the dining hall for four years, serving food to and cleaning up after his wealthier classmates.  During those years, Cole grew troubled by the stark class differences around him.  After graduating magna cum laude from Williams, Cole worked in food service, in a vet’s office, and for a lawyer before deciding to apply to law school.

At Northeastern University School of Law, Cole was an active member of the LGBTQ community in Boston and on campus.  Spurred by his experiences and observations of inequality and injustice, Cole decided to use his law degree to protect society’s most vulnerable.  From 2005 until 2009, Cole worked for Lambda Legal, helping transgender people across the country stand up for their rights in court.  After that, Cole followed his heart to serve people living in poverty – first in a rural setting through Georgia Legal Services Program, and, since 2014, in Atlanta through his work at AVLF.

Cole believes that knowledge is power; that small acts of kindness make a big difference; and that we must strive for our vision of liberation, even when it feels unattainable.  He shares his home with his husband and a friendly pack of rescue dogs and cats.