Life happens, and sometimes we lose our footing. But without the hand of a friend to grab or a railing to reach for, it becomes harder for us to fight gravity.

We have all experienced a trip or a fall. Normally, we can quickly right ourselves and continue on our way.

But sometimes, we start out with a light trip that ends up as a full blown fall straight to the ground – “face plant.”  An unexpected reminder that gravity is a force to be reckoned with.

This same type of fall can provide a useful context for analyzing the eviction crisis.  A family member’s income can take a dip due to fewer hours, a layoff or a firing.  This is that slight trip that we can experience from a dip in the sidewalk, or a bit of debris in our path.

But because the family’s income is at or barely above minimum wage, that “trip” starts the downward trajectory toward the pavement.

Atlanta has a high eviction rate.

Some of the reasons for this high eviction rate include: high income inequality between the lowest and highest income classes, rising rents outpacing average salaries and lack of social safety nets to assist families in crisis. Many families are one paycheck away from homelessness. A single crisis could completely disrupt a families ability to pay rent.

Eviction and involuntary displacement is a regular reality for too many families. And for Black women and children in Atlanta, the chances of being evicted are strikingly high.

Furthermore, Georgia’s eviction law is not tenant-friendly, meaning that one missed rent payment results in eviction and imminent or actual homelessness less than one month after an eviction notice is filed.

Eviction and involuntary displacement is a regular reality for too many families. And for Black women and children in Atlanta, the chances of being evicted are strikingly high. Eviction rates are disproportionately higher in Black neighborhoods such as South Atlanta and Southwest Fulton County.

What does a higher eviction rate mean for these neighborhoods?

Higher eviction rates lead to higher transiency and less neighborhood stability.  Neighborhoods that frequently experience a higher turnover rate likely lead to that neighborhood having less of a core population that will pay attention to and demand that regular improvements are made.

After all, if a family knows that they will not be staying, what is their incentive to invest time and energy in that neighborhood?

A child that constantly has to change schools due to involuntary moves has a harder time adapting and keeping up with their peers.

High transiency also means that the schools have a higher turnover rate for attendance.  n some Atlanta schools, the transiency rate is a high as 40%. A child that constantly has to change schools due to involuntary moves has a harder time adapting and keeping up with their peers.

This higher eviction rate in communities of color does not exist in a vacuum.

Redlining, higher rent burdens, and the systematic destruction of affordable housing have all contributed to a higher rate of eviction in communities of color.

Redlining is the process by which federal agencies as early as the 1930s categorized neighborhoods and their desirability.

The Homeowners Loan Corporation (HOLC) was a government-sponsored corporation that was established to determine the creditworthiness of different areas for the purpose of refinancing mortgages. Overwhelmingly, the neighborhoods that received the worst grades were the ones with the highest share of minorities, in particular Black residents.

Neighborhoods considered high risk or ‘hazardous’ were often ‘redlined’ by lending institutions, denying them access to capital investment which could improve the housing and economic opportunity of residents,” is how the National Community Reinvestment Coalition describes the effects of redlining.

The practice stunted growth in the communities of people of color and is credited as one of the most significant factors in cementing segregation in American cities for decades.

While redlining was banned with the Fair Housing Act of 1968, the National Community Reinvestment Coalition found in a 2018 study that “most of the neighborhoods (74%) that the HOLC graded as high-risk or ‘hazardous’ eight decades ago are low-to-moderate income today. Additionally, most of the HOLC graded “hazardous” areas (nearly 64%) are minority neighborhoods now. [Source: What is Redlining, and How Did It Happen in Atlanta?]

The average cost to rent a two bedroom apartment in Atlanta is around $1300. However, the average individual working a minimum wage job at 40 hours a week is only bringing home slightly more than $1200 a month.

On average, it is estimated that families need to earn about twice the federal poverty threshold to meet their most basic needs ($48,678 for a family of four with two children in 2016).  Families living with incomes below this mark are considered low-income.

As of 2016, 63% of children living in low-income families were Black. Lower income families typically more than the recommended 1/3 of their income to cover housing costs leading to higher rent burdens.

Atlanta was the first city to build public housing in the 1930s.  A total of 45 housing units were built between 1936 and 1991.  By the spring of 2011, just about all of those affordable housing projects were torn down – and very little has been done to replace that affordable housing stock. This increases the burdens on low-income families to make ends meet and contributes to the eviction crisis we are currently experiencing.

The least the legal community can do is continue to provide access to the legal services that will help keep them in the housing that they do find.

In short, there are so many obstacles that low income tenants in Atlanta face as they try to obtain and maintain safe, affordable housing.  The least the legal community can do is continue to provide access to the legal services that will help keep them in the housing that they do find.

Atlanta is losing affordable housing quickly,  with a “decline of 16 percent of affordable units between 2010 and 2014.” And research has confirmed that places with higher rent burdens have higher eviction rates.

At AVLF, we work hard to fight for the safety and stability of low income Atlanta families, and reach out a hand to help.

As of June 2020, the Magistrate Court in Fulton county was facing a backlog of over 1,800 eviction cases that have been accruing since the start of the pandemic.

Life happens, and sometimes we lose our footing. But without the hand of a friend to grab or a railing to reach for, it becomes harder for us to fight gravity.

Without savings, or disposable income, that change to income becomes a serious obstacle to the families’ ability to meet basic needs, and the gravity of the situation pulls us further towards imminent homelessness.

Before we even fully comprehend what is happening we can find ourselves on the ground, bruised and dazed. And many families in Atlanta, can find themselves facing eviction before they can even attempt to recover the lost income.

At AVLF, we work hard to fight for the safety and stability of low income Atlanta families, and reach out a hand to help.

You can support our crucial work around eviction defense. Donate now. 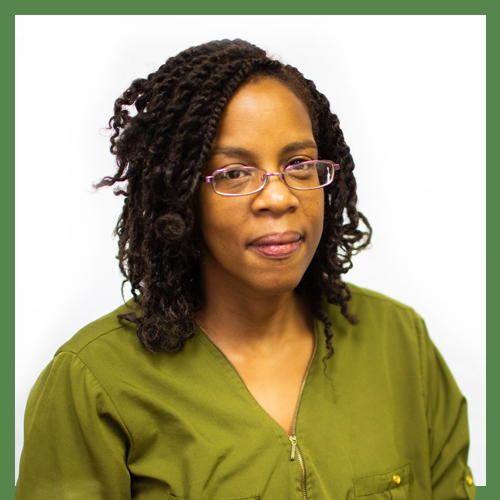 Ayanna serves as the co-director of AVLF’s Safe and Stable Homes Project, focusing mainly on the Standing with Our Neighbors program.

Ayanna obtained her B.A. in history from Clark Atlanta University. After obtaining her degree, she worked in education for the next four years. Ayanna attended Emory University School of Law before working for the nonprofit Georgia Legal Services Program for seven years. In that position, she worked closely with low-income communities in North Georgia and tackled unemployment, public benefits, subsidized housing, domestic violence, and elder care.